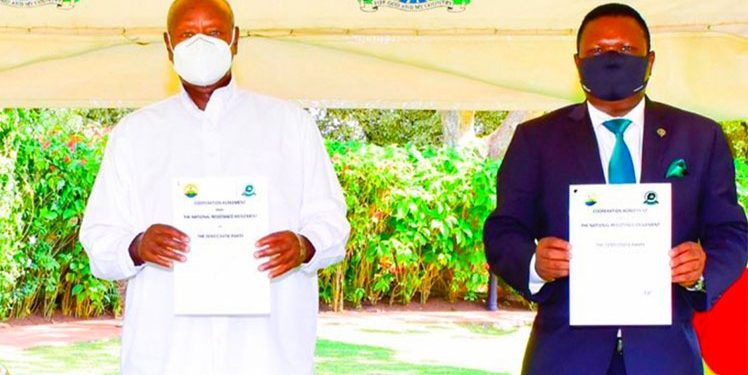 Forum for Democratic Change (FDC) party has claimed that the “marriage” between President Yoweri Museveni and Democratic Party president Norbert Mao is only destined to end in tears.

Over the weekend, while speaking at the belated Youth Day celebrations in Mitooma, Mao, who is the minister of Justice and Constitutional Affairs, claimed that he’s the mechanic of Uganda’s constitution.

According to Mao, Museveni gave him the assignment to start Uganda’s transition.

“The transition will be in three phases. Phase I is the one we’re on. Phase II is the one I saw you people signing on to, although some signatures are not clear.

Phase II is to implement what we have agreed upon. I believe by 2031 we shall have a new Uganda, “Mao said.

He added, “The future of Uganda is bright. Keep yourselves healthy.” Uganda will be built on the dreams of young people, and I am here to challenge you to dream big.”

In response to Mao’s comments, FDC, through their official Twitter handle, said,

“The newly political wed is bouncing off the wall in the new marriage with Museveni, who raped Uganda’s constitution with fundamental articles to strengthen his presidential monarchy and oppress Ugandans.”

Nonetheless, this marriage will also end in premium tears! 😭”

Mao was appointed minister for justice and constitutional affairs in July this year following the signing of a cooperation agreement between the ruling NRM party and DP.