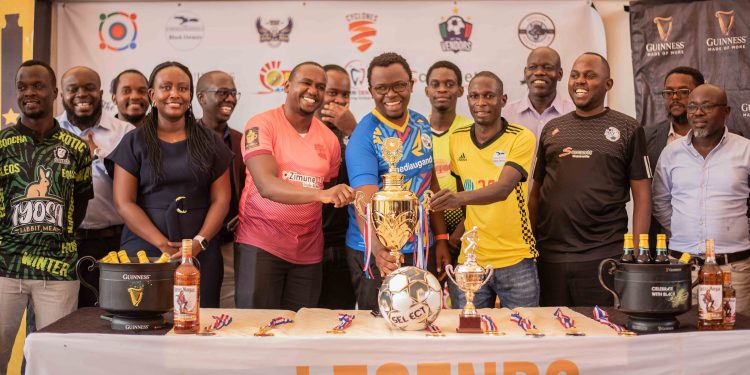 Season Five of the SMACK old boys league will be coming to an end this Sunday, November 13, at Legends Grounds in Lugogo.

The announcement was made earlier today, at a press conference held by the leadership and sponsors of the league, which has now become a social phenomenon in Kampala.

At the press conference, the event organizers and sponsors, including Guinness, emphasized that the finale is set to be action-packed, with not only a nail-biting fight for the top spot but also an epic lineup of entertainers.

“This finale is one that we have prepared for a long time. All teams ready to rumble for their final spots on the table with the Block Owners and the Zulus of course vying for the top spot,” said Hillary Ainomugisha CEO of the SMACK league.

“I urge you guys to come out on Sunday. This finale will be celebrating a successful end to a very exciting season, we have big plans and are doing it in style,” he added.

His sentiments were re-echoed by Guinness Uganda Brand Manager Elizabeth Mutamuliza, who re-emphasized the brand’s position in the league and why the league is very important for the brand.

“ I am sure you can all attest to the enigma that the SMACK League has been this season. We have watched the league morph into a social phenomenon from just the Old Boys of St Mary’s College Kisubi playing football to a social event that has brought many together. This in particular has been a joy for us because the league has not only grown, but it has also cemented itself as arguably the biggest old boys’ league in the country, giving us the opportunity as Guinness to interact with our consumers during the match days,” she said.

“ So, this Sunday as you have heard from our partners, we have big plans for you guys, it’s going to be an epic climax to a riveting season,” she added.

The league is an initiative that was started by the old boys of St. Mary’s Kisubi as a way to network. It has since morphed into a social event, attracting Kampala’s party lovers who flock to Legends Bar in Lugogo every other Sunday.

Museveni makes changes in the army, appoints new Commander of the Air Forces