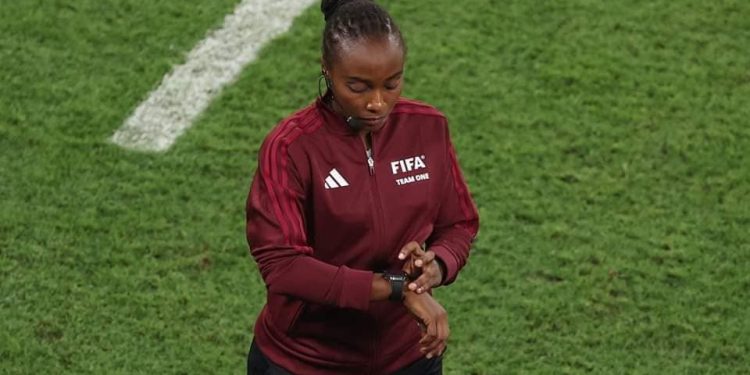 For the first time ever, female referees have been chosen to officiate at the FIFA men’s World Cup.

Stephanie Frappart, Salima Mukansanga, and Yamashita Yoshimi, are among the 36 referees chosen for the ongoing competition in Qatar.

Rwandan referee Salima Mukansanga was last night in action as the fourth official in a game where defending champion France beat Australia 4-1.

Mukansanga, as a young girl, always dreamt of playing basketball professionally. She told the News Times that she liked basketball and wanted to take it seriously, but that access to basketball infrastructure was difficult.

That’s how she ended up refereeing, which she says she has no regrets about. It led Mukansanga to the 2019 Women’s World Cup, the Tokyo 2020 Olympic Games, and now Qatar.

She was also involved in the Tokyo 2020 Olympics last year. Earlier this year, she also took charge at the men’s Africa Cup of Nations. After being named an official for the 2019 Women’s World Cup, she said that officiating at the World Cup is “every referee’s dream.”