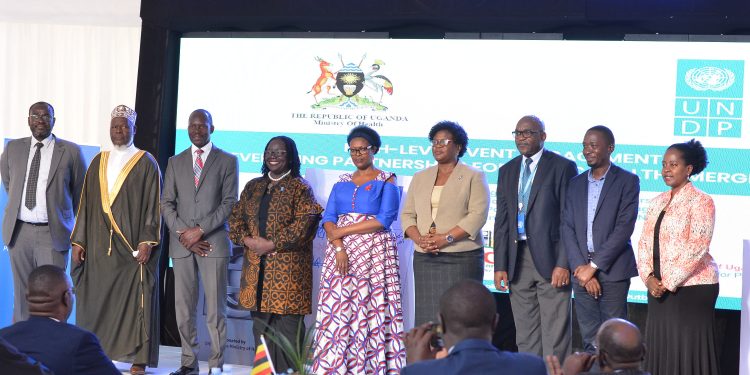 The United Nations Development Programme (UNDP) Uganda has partnered with the Ministry of Health, cultural and religious leaders to scale up the National Ebola Response to curb transmission of the virus, minimize mortality, disruption of socio-economic and health systems and improve standards of care for affected persons.

Under this initiative, UNDP is working with the Ministry of Health, the World Health Organisation, the Inter- Religious Council of Uganda, Buganda Kingdom and Kampala Capital City Authority to improve standards of care and strengthen public health risk communications and community engagement with emphasis on risk groups such as boda boda riders and other vulnerable populations.

Provision of heavy-duty washing machines and incinerators to support Infection, Prevention and Control (IPC) and deployment of specialist UN Volunteers to support the National Ebola Response in high-risk areas has been prioritized. A total of 20 technical experts who include eight Infection Prevention Officers, two Psychosocial Support Officers, four Case Management Officers and six nurses have so far been deployed through the World Health Organisation to improve standards of care for Ebola patients, suspects and survivors and minimize transmission in healthcare settings and communities.

Speaking during a high-level engagement on “Leveraging Partnerships for Public Health Emergencies” held at UNDP offices, Hon. Margaret Muhanga, the Minister of State for Health in Charge of Primary Healthcare, commended UNDP for partnership with traditional and religious leaders in supporting the national EVD response, “We believe that people listen to their cultural and religious leaders and that’s why this partnership is very important.”
On her part, UNDP Resident Representative Ms. Elsie Attafuah underscored the role of traditional leaders and faith institutions in influencing behavioral changes and cascading EVD messages using their structures. Ms. Attafuah also called for innovative ways of enhancing preparedness and response to emergencies,

“We are confronting a perfect storm of evolving threats and growing uncertainty where Uganda has to find innovative ways to build system resilience to tackling impacts of multiple crises at a go – Ebola, COVID-19 pandemic, flooding, drought, hunger, rising prices, etcetera,” she said.

Following the outbreak of the Ebola Virus Disease, the United Nations Development Programme repurposed core resources and secured additional funding from the UNDP Crisis Bureau to contribute US$1,300,000 (about UGX 4.85bn) to the national response in the following priority areas: (a) Risk Communication and Community Engagement; (b) Strengthening EVD Response Coordination at National and Sub-national Levels; (c) Infection Prevention and Control (IPC) with a focus on EVD Waste Management; (d) Human Resource Support; and (e) Socio-economic Impact Assessment and Early Recovery.

Central to this support has been the mass production and distribution of Information, Education and Communications (IEC) materials through Buganda Kingdom and the Inter-Religious Council of Uganda (IRCU) structures. The IRCU comprises the Roman Catholic Church, the Province of the Church of Uganda, the Uganda Orthodox Church, the Uganda Muslim Supreme Council, the Seventh-day Adventist Church Uganda Union Mission, Born-Again Faith in Uganda and the National Alliance of Pentecostal and Evangelical Churches in Uganda.

Buganda Kingdom and IRCU speak out

Both IRCU and Buganda Kingdom have held media and community engagements, issued public statements including a pastoral letter to the nation by the IRCU leadership rallying the public to adopt positive behavioral tendencies to minimize spread of the disease and debunking myths and perceptions about Ebola.
“What we have here is an enemy who is mercilessly lethal and deadly. We, therefore, call upon the public to note that Ebola is real, has no cure and kills. Ebola should be understood from the scientific rather than mystical or spiritual perspectives,” reads a press release issued by the IRCU on 16 November 2022.
The IRCU leaders also urged the populace to adhere to the Standard Operating Procedures set by the Ministry of Health in the fight against Ebola.
Similarly, there was a statement issued by Buganda Kingdom, through which the Prime Minister Charles Peter Mayiga commended frontline workers and also clarified falsehoods about the spread of the Ebola Virus Disease.