Frank Gashumba is known as a motor mouth who speaks his mind and he is generous with insults. The self-styled social critic and activist is a regular on local FM stations calling politicians, corrupt government officials and his haters all sorts of names like cockroaches and rats.

Now touch his daughter and you will face the wrath of his acid tongue. Frank used his Facebook page on Saturday to hit at his daughter Sheilah’s haters, reducing them to paupers and village piglets.

“I pity paupers who abuse us. There is no one who abuses Sheilah that is better than her. She is more well-mannered, she has more money, she is more beautiful, more known among people that matter, she sleeps well, moves comfortably, she went to good schools, she has never used a taxi in her life and when she grows up, she will end up leading you people who are dissing her.

To those who are always supportive of her, God Bless You. But you village piglets that made it to Kampala, I can’t “help but laugh at you. We are moving forward.”

It all started with a fake NTV Be My Date account claiming that the 18-year-old Sheilah had been fired from NTV because she had slept with Nigerian star Wizkid who was in Kampala for a Guinness All Black party this week.

But if you thought Frank Gashumba can abuse, then Sheilah is really her father’s daughter because she compared the brains of the admins of the fake page to water melons.

And then the plus size Miss Uganda

And then the plus size Miss Uganda 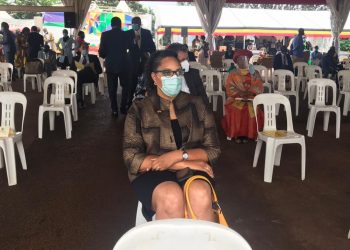