Stella Nyanzi turns condoms into balloons during a s3x talk with 11-year-old daughter. 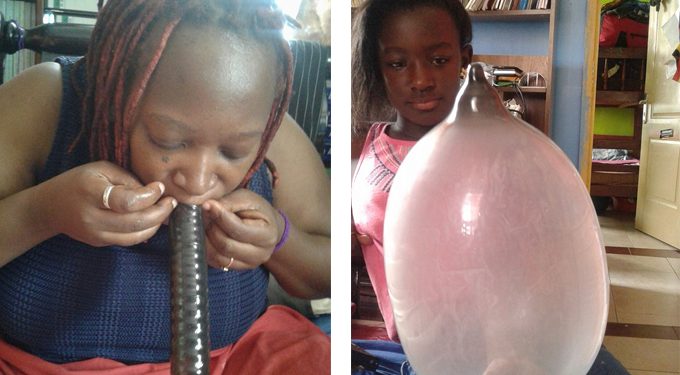 Controversial don Dr. Stella Nyazi is at it again, this time on the talk that’s most dreaded by parents. When a child is almost hitting puberty, most parents take cover and hope for the best, but not medical anthropologist Dr.Stella Nyanzi. She took sex education with her daughter to a whole new level as she narrated on her Face book page “Feeling like a Ninja-Warrior, I pulled out a packet of black condoms…” Nyanzi and her 11-year-old daughter are seen playing with the condom as a balloon after the educative purpose  was done. Below is her post. I had the ‘condom talk’ with my eleven-year-old daughter. I explained the dangers of unprotected sex, without blinking. Feeling like a Ninja-Warrior, I pulled out a packet of black condoms. She asked about the colour. I told her I preferred condoms that look like the real thing. Luckily, she did not ask for details about the colours of things. So I talked about the tip of the condom and how it is important to squeeze out the air before rolling it up the waiting specimen. We practiced squeezing gently in order not to tear the tip. She asked about how women with long varnished finger-nails squeeze out the air without tearing the condom. I referred her to her auntie with long varnished finger-nails. God bless their next meeting! And then I talked about disposing of the condom after using it. I was careful not to leave out any age-appropriate detail of condom-use for my darling daughter. And then I asked if she had any question. “Yes, Mama Stella,” she said enthusiastically. “I have a question.” “What do you want to know?” I asked with a sense of foreboding. “So, how big does the condom become if I blow it Mama?” She asked. “Oh, big, I guess,” I replied cautiously. “Please, please, please Mama Stella, can I blow it and see?” she asked. “Sure. Here,” I said as I held out a condom. “Eeeooww,” she made a face at the oily lube on the condom. “For smooth entry and travel,” I explained. And then my daughter blew and blew and blew the condom. It got much bigger than the balloons we usually blow to decorate our party-rooms. She put it onto her belly-button and it nearly touched the floor. We laughed at the joke. And then, just as the child she is, my daughter began to play catch with the blown condom. She threw it up into the air and reached up to get it. Our condom talk was over!
Tags: Makererestella nyanzi
Previous Post