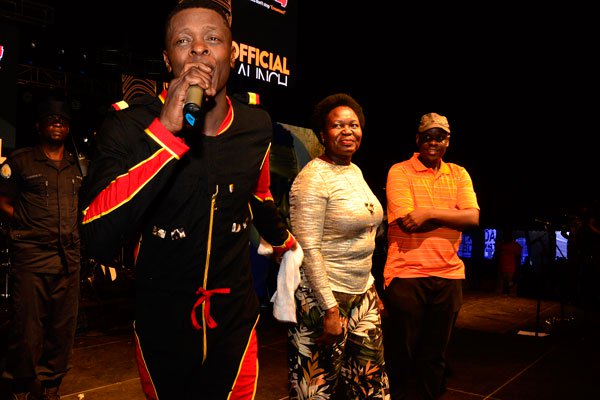 At the same concert, Chameleone angered the promoter when he grabbed a microphone off the National Resistance Movement (NRM) Chief Whip, Ruth Nankabirwa when she was officially opening Balaam’s radio station 103.4 FM, Radio 4.

To get back to Chameleone, Balaam has scrapped Chameleone’s upcoming shows this Christmas despite the singer publicly apologizing to Nankabirwa saying that his actions were not politically motivated.

According to insider sources, Balaam was also angered by the fact that Chameleone’s former nemesis, Bobi Wine made a surprise appearance at the show amidst People Power chants and .

To make matters worse, Bobi Wine whose shows are currently blocked even went up on stage and together with Chameleone, performed the famous Kyarenga hit to the enchantment of fans but the duo did not account for how pissed off they made Balaam.

Balaam has now hit back to teach the Legend Saba Saba a lesson about respect, loyalty and good manners through frustrating his already scheduled concerts.

Chameleone had, however, covered enough ground having performed in Mukono, Jinja, Mbarara and other major towns respectively.