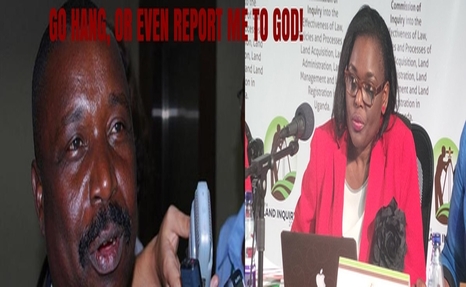 There was war during the proceedings of the Commission of Inquiry into Land Affairs today afternoon, after Deputy Attorney General of Government Mwesigwa Rukutana took on the commission’s Chairperson Justice Catherine Bamugemeire. Counsel Rukutana had showed up in the Commission to explain how government acquired a contested swathe of land found in Bukasa, Makindye Dividion which is being contested for by the Buganda roya family and a one Doctor Buwule who says he legally bought it from government.

The spat between the Attorney General and the Justice emerged when Justice Bamugemeire told Rukutana that he was condescendingly answering questions put to him by the land commission’s Lead Counsel Ebert Byenkya, and warned him to be more respectful to the commission. Rukutana lost his cool at the way the Justice was warning him and told off the commission chairperson, and what followed was a brief exchange of sharp words before Justice Bamugemeire expelled the Attorney General from the public hearing.