Cindy tells Sheebah to stop working under pressure, “I can give you more 20 to 30 years to prepare for the battle” 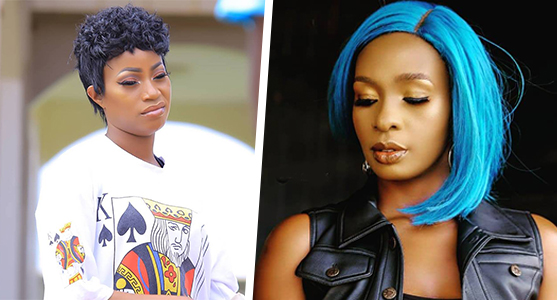 The King herself Cindy has come out to advise her nemesis Sheebah Karungi to stop working under pressure.  Appearing on a TV interview, Cindy admitted that the self-proclaimed Queen Karma has for years been doing good music though her recent releases, ‘Jealousy’ and ‘Kimansulo’ are half baked compared to her known standards.

“I believe Sheebah is a good artist but she should stop working under pressure,” said Cindy.

Cindy went ahead to offer some advice saying; “Sheebah could be releasing this kind of music because she is trying to reply to my ‘copycat’ song. She should take a deep breath and relax.”

“If such songs are part of her preparations for the battle, then she needs more time. I can give her 20 to 30 years to prepare for the battle,” added Cindy with a confirmation claim of her being ready anytime the battle is set.

Cindy’s tiff with Sheebah is believed to have started when Cindy appeared on a TV interview and asked for a battle with the Queen Karma claiming that she is better than her.

Besigye: Museveni didn't become president through an election, the guns brought him and Ugandans shouldn't put their hopes in elections