The national anthem is meant for the president and functions attended by him; South Sudan moves to ban the singing of national song in Salva Kiir’s absence 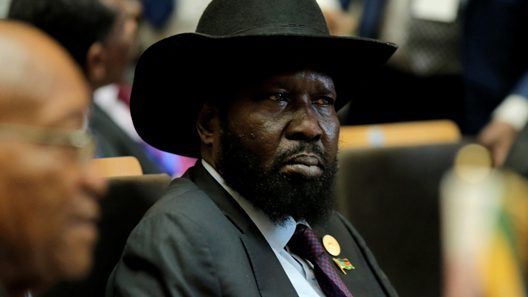 Did you think you had heard it all about African geopolitics? Well, not yet! South Sudan still has something out of her sleeve that will shock you.

According to information coming out of Juba, the president – Salva Kiir Mayardit is banning the singing of the national anthem in his absence and at functions he is not attending in person.

Our sources in Juba have comfirmed that information minister, Michael Makuei made the announcement on Monday following a Cabinet sitting that took place over the weekend.

“We’ve seen that the anthem is played even when the ministers, undersecretaries, the governor or state ministers attend any function. This order should be observed because the anthem is not mean for everybody…It’s been observed that the national anthem is been played all over, the minister reportedly said.

Africa’s youngest nation has been involved in a series of conflicts, some tribal and others territorial and analysts argue that the personalisation of the national anthem by President Kiir will frustrated the impending talks to make good with his former ally, Riek Machar.

Several ceasefire agreements brokered by Uganda’s President, Yoweri Museveni have failed to deliver peace to the country and according to UN figures, more than 4 million people have fled the country since 2011 – 800,000 of whom live in several refugee camps in Uganda.

World Vision research estimates that more than 400,000 people have died due to the conflict.