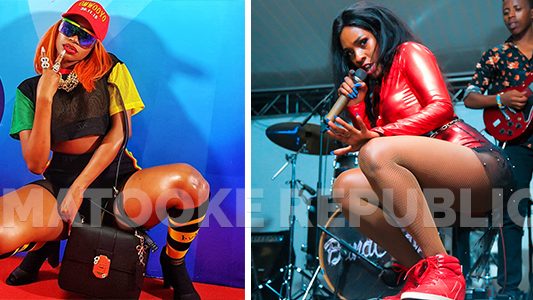 If what we saw on Cindy and Sheebah’s Instagram pages is to go by, the two singers have decided to squash their months-long beef. The two have been engaged in verbal exchanges on social media for a few months, and it made fans get involved choosing sides defending who of the two musicians is bigger and better that the other.

The beef also influenced both musicians to make songs dissing each other although they (the songs) were not that successful save for Cindy’s ‘Copicat.’

All that is in the past now. Over the weekend, Sheebah shared a video of herself dancing and enjoying Cindy’s new song ‘Boom party’ on Instagram with the caption, “This song is lit.”

On seeing that, Cindy re-shared the video on her Instagram page saying that she was shocked her former nemesis liked the song and went on to thank Sheebah for showing support to her new song.

Although some people said that this beef is good for Ugandans music, the music that came out of it speaks otherwise and it is great to see that it is finally over. Ugandan music needs more unity if it is going to ever move forward.

INTERVIEW: “Clients have unrealistic demands, one demanded to drop 10kgs in one week but never wanted to train every day,” Bashir Kabanda, a fitness trainer takes us through his job

INTERVIEW: “Clients have unrealistic demands, one demanded to drop 10kgs in one week but never wanted to train every day,” Bashir Kabanda, a fitness trainer takes us through his job