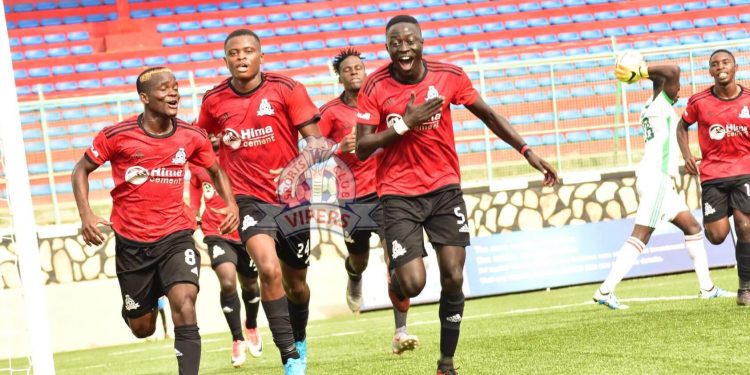 The Venoms angrily kicked off the game making fast offensive transitions in the opponents half. Their accelerating intensity paid off as the side got two early goals in a space of four minutes.

Frank ‘Zaga’ Tumwesigye gave them the lead by heading in Bobosi Byaruhanga’s corner kick and in the 25th minute, flashy Allan Kayiwa doubled the lead with his well calculated free kick.

The two goals acted a wakeup for BUL with the Jinja side pulling one back in the 29th minute through Deogratious Ojok. The action remained intense only cut to pause by the halftime whistle.

After the long break the each side looked reenergized and ready to turn the game to its favour. However, the halftime score was maintained as BUL failed to net an equalizer. Vipers now lead the table on 20 points, one point above BUL FC.

Defending champions KCCA Football needed to believe until the final whistle to secure a win against hardboiled Maroons Football Club. The fulltime 3-1 score line might show an ease win for KCCA but the Kasasiro boys had to wait for a 90th minute penalty that was converted by high-scoring left back Mustaf Kizza to take advantage of the tie.

And in the added minutes, Nigerian John Odumegwu got his maiden KCCA goal and buried the tie. Earlier on The Kasasiro boys got an early goal through Mike Mutyaba before Walusimbi got the equalizer for the hosts. KCCA have now climbed up to the sixth position.

It’s becoming very clear that Proline will be battling relegation this season as they have again today lost 1-0 to Kyetume Football Club.