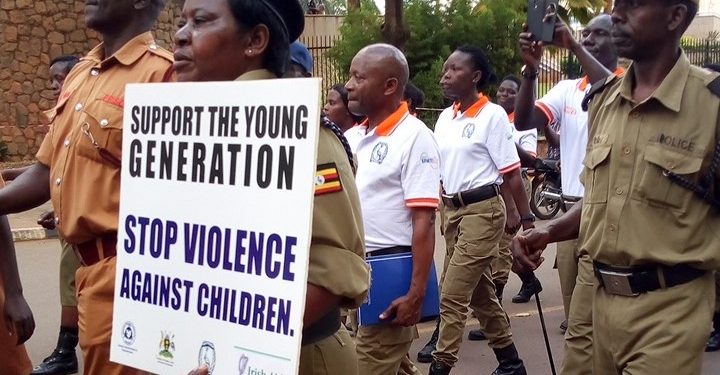 Gender-based violence can simply be defined as harm inflicted upon individuals and groups that is connected to normative understandings of their gender. This kind of harm can take different forms like physical, sexual, psychological, mental, and economic among others.

According to an Annual Police Crime report released last year in May, the number of sex-related crimes recorded increased in the year 2018, with a total of 13,916 cases recorded countrywide.

Uganda Bureau of Statistics figures released in 2016 show that 59% of women that reported sexual violence said it was coming from their current husband or partner, and 29% of them continued to get violated by their exes, 7% by their friends and 7% by their current boyfriend.

Studies show that poorer women, those with lower levels of education and those with a disability mostly living in rural areas are more likely to experience violence.

Although this is the case, a survey conducted by Afrobarometer in 2017 showed that 82% of men don’t believe in the heinous act of beating their women.

In an effort to unearth the causes of gender-based violence, we had a chat with Flavia Faith Neto, a social worker who has previously worked with the World Vision and other women and children-centered Non Governmental Organisations in different parts of the country.

Neto told us that gender-based violence is rooted in some harmful traditional norms and cultures in Uganda.

“In most customs in Uganda, the man is the head of the house and everyone else is below him so he can do whatever he wants without the need to put anyone’s opinions in consideration. The woman is submissive and has to serve her husband at all costs. This makes almost all forms of requests and abuses from the man seem normal to the woman,” Neto said.

Other traditional practices like bride price where women are exchanged with material things like cattle, sugar and others make men feel like women are their property so they can treat them as they please, and this puts some women in a tight spot with no options or opinions for they truly saw the exchange taking place during the introduction ceremony.

Gender-based violence that occurs mostly in rural areas is largely attributed to poverty, alcoholism and ignorance, as Neto observed during her upcountry assignments.

“Many women still don’t understand that rape exists even in marriage. They believe that a husband cannot rape his wife since it is her duty to sexually satisfy him whenever he wants,” Neto remarked before adding that most rural women also take pride in being physically assaulted by their men because it is proof that he cares, to the extent that some of them ask their husbands why they don’t beat them for to them, beating is equivalent to love.

So if women are endlessly battered, why do they keep living with their abusive partners?

Most of the victims we talked to that have children in their marriages and relationships said that most of them stay for the sake of their children. They said, “If I leave, the man will bring another woman who will mistreat my children. I have to stay to protect them.”

Those who were married off at a younger age have grown to be so dependent on their abusers and they don’t know life without them, let alone having nowhere to return to since their parents fully gave them into marriage.

Our society treats women that have left marriages or relationships as failures, so in order to protect what they think is dignity and not be ridiculed by society, most victims stay in these abusive marriages.

What do the authorities/public say?

Several organizations have come out to strongly condemn gender-based violence and encourage women to speak up, defend their rights and report any form of abuse to the authorities to have them apprehended.

Last year, the Uganda Police Force joined activists in 16 days of sensitization aimed at creating awareness for gender-based violence. It was during these days that Assistant Inspector General of Police (AIGP) Asan Kasingye promised total support in fighting rights for women and girls by creating a directorate in charge of women affairs in the Uganda Police Force that will drive the women power in the country.

State Minister for Gender and Culture Peace Mutuuzo also said that the campaign was aimed at promoting gender equality in Uganda, although gender equality is still a foreign concept in the minds of Ugandans. A combined 58% of the population disagrees with the whole concept, according to a Sauti za Wananchi survey by Twaweza Uganda in 2019.