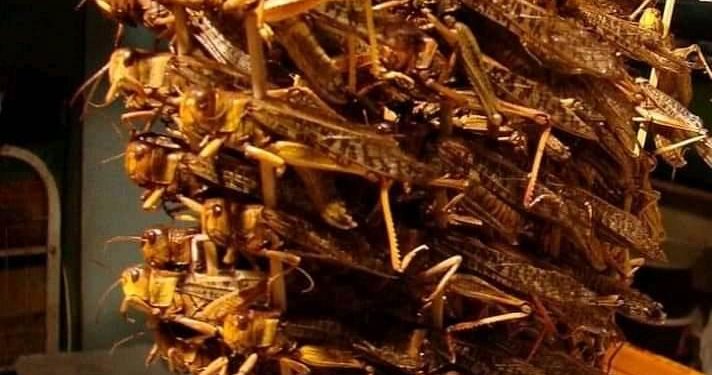 Last evening, the Office of the Prime Minister confirmed the invasion of locusts in Uganda through the Karamoja region, specifically Amudat district. The government has already deployed 2000 UPDF soldiers to fight them, as preparations to buy planes that will be used to spray them away are underway. With this, we can say that government is ready to fight these insects with all they have got.

Should we panic? Yes, because to a certain extent locusts can cause famine as a swarm of them can literally eat every kind of green they come across, and we can only hope our soldiers change the colour of their uniform lest they be eaten.

Speaking of eating, before we let the locusts eat our green, and soldiers, we can eat them in return. Yes. Locusts are edible and whoever advised them to come to this grasshopper-eating country misled them.

Several cultures throughout the world consume insects, and locusts (a species of grasshoppers) are considered a delicacy and eaten in many African, Middle Eastern, and Asian countries. They have been used as food throughout history.

Locusts can be cooked in many ways, but are often fried, smoked, or dried just as we do with our nsenene and can be eaten by all religions as they have been recorded to be eaten both in the Bible, the Torah, and the Qur’an.

Are you low on Proteins? Are you skinny and in need of some fatty acids for your body? Are your bones as weak and soft as a banana and you need calcium? Locusts are the answer and God has provided them in big numbers for free, as He always does.

Locusts have been proven to be rich in proteins, yielding five times more edible protein per unit of fodder than cattle, and produce lower levels of greenhouse gases in the process, according to the book Ecological implications of mini-livestock: potential of insects, rodents, frogs and snails by Paoletti MG.

Calcium, Magnesium, Iron, Zinc, and Potassium have also been found present in Locusts. Friends, we have a balanced diet amongst us in these locusts.