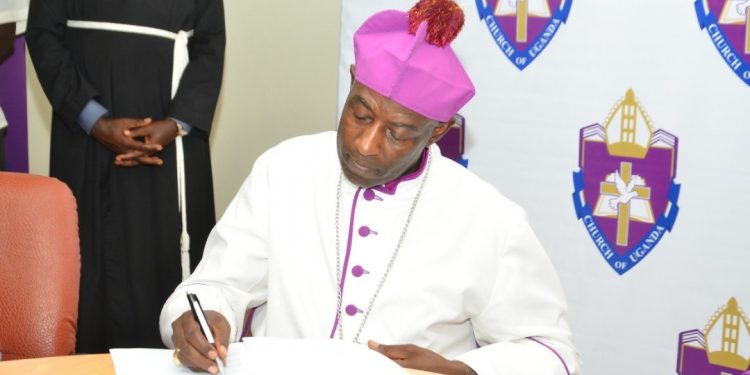 The new Archbishop of the Anglican Church of Uganda, His Grace Stephen Kazimba Mugalu.

Church of Uganda yesterday, Sunday, March 1, 2020 installed Bishop Stephen Kazimba Mugalu as the 9th Archbishop of the Province of the Church of Uganda at St Paul’s Cathedral Namirembe.

Dr Kaziimba was elected by the House of Bishops in 2019 to replace His Grace Stanley Ntagali who yesterday retired after 10 years as head of the Anglican Communion in Uganda.

The cost of education in Uganda is going higher and higher every other day that makes some wonder if it is even worth it after completing school and walking for years without landing a decent job.

Minister of State for Higher Education John Chrysostom Muyingo last week came out to warn schools, whether private or public, against increasing school fees for whatever reason without written authorization.

“No school, private or government, shall increase school fees for whatever reason without written authorization from the Permanent Secretary, Ministry of Education and/or Chief Administrative Officer/Town Clerk as the case may be,” Muyingo said.

High Court Justice Andrew Bashaija on Thursday heard that Seguya suffered mental anguish to which he seeks general damages for being inconvenienced as he does not know what is going on with his leaders.

Seguya, through his appointed lawyer, Male Mabirizi, claims that his rights to be heard were violated as no notice or reason was given to him before he was blocked by the three government officials.

Court also heard from Mabirizi that President Donald Trump who had blocked some people on his Twitter account on grounds of privacy was ordered by court to unblock them since it is a platform he uses to disseminate information for public consumption and therefore, the High Court in Uganda ought to adopt the same.

Mabirizi further asked court to consider AIGP Kasingye’s January 25, 2020 decision to unblock Seguya as a clear indicator that what the trio did was illegal.

Justice Bashaija subsequently set May 20, 2020 as the date he will deliver his ruling on the case.

According to Nakiwala, though she is yet to receive an official complaint from Kenzo, she is willing to intervene. Nakiwala said Kenzo is entitled to meet Aamal since he is the biological father.

“When Eddy Kenzo gets to feel like he wants to meet his daughter after failing to find a way in a peaceful style, he can come to our office and we mitigate through those matters in my office,” Nakiwala said.

On several occasions, Kenzo has come out and revealed how he is finding a hard time meeting his daughter Aamal. Kenzo disclosed that at first he had a contact person in Rema’s circles but when she got closer to her husband Dr Hamza Sebunya, the avenue was completely blocked. Kenzo said it is almost a year without meeting Aamal.