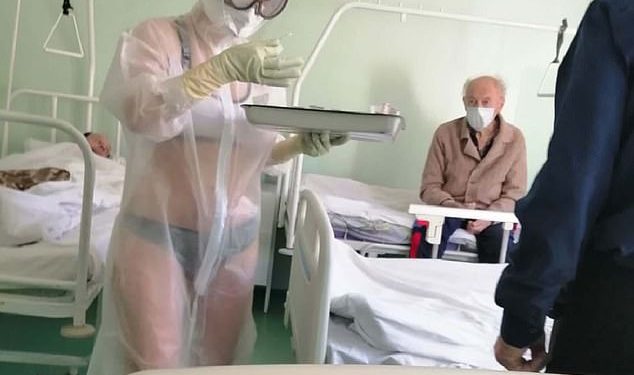 The nurse wore only lingerie in her PPE because of the heat. COURTESY PHOTO.

The world over, there is a need for transparency in service delivery in all sectors be education, agriculture, tourism, business and health sector among others. But just because transparency is required, it does not mean you will wear transparent outfits as you please, more so in a hospital.

Yesterday, a photo of a nurse wearing only underwear in her transparent personal protective gear working in an all-male COVID-19 patients’ ward went viral on social media. The photo, according to UK news site The Daily Mail was taken by a male patient in the ward, and shared it saying that there were ‘no complaints.’

In her defence, the nurse who works at Tula Hospital in Russia said that she decided to go ‘half bare’ because she was feeling ‘too hot’ wearing her uniform under the protective gear, but she didn’t know it was so transparent.

This disciplinary action has been met with missed reactions, with some patients saying they were somehow embarrassed by the nurse, but largely others did not complain.

“At least someone has a sense of humour in this gloomy, gloomy reality,” said Sergey Ratnikov.

Another supporter said, “Everyone shouted at her, but no one paid attention that she was dressed in this way because of the heat. Maybe you need to yell at the management … because there is no normal air conditioning here.”

A woman commenter Marina Astakhova posted, “Well-done, she raised the mood of the patients.” , and another said, “Why punish the nurse? You need to reward her. Seeing this outfit, no one wants to die.”