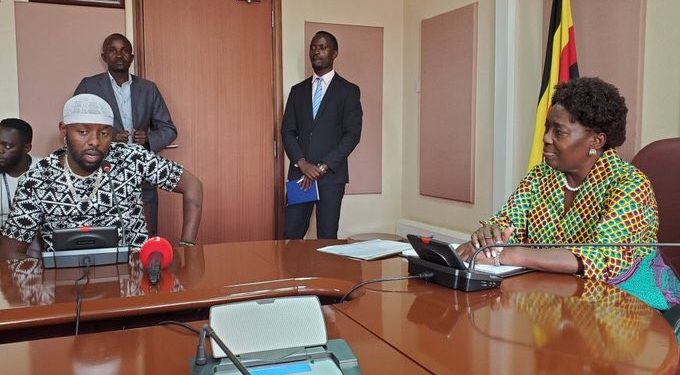 Ever since international flights were suspended late in March this year just before the first Coronavirus (COVID-19) case was confirmed in Uganda, Ugandans that were locked out of the country have consistently asked the government to find ways of repatriating them back, for they are living in immense hardship.

One of these is musician Eddy Kenzo, who was locked out of the country in Ivory Coast. Kenzo had travelled to the West African country to perform at a concert, but the suspension of international travel meant that he would be stuck there for an unknown period of time.

Kenzo has repeatedly been asking “gavumenti weyayu?” to come to his rescue, one time even joking about selling his brand new Land Cruiser V8 to someone that could send him some money via Western Union for upkeep, and saying that he is in deep debt.

Today, Speaker Rebecca Kadaga has revealed that she has talked to the ‘President of the Love Niggas’ Kenzo on a phone call and he has narrated to her his worrying situation.

In a tweet, Kadaga has said that Kenzo is in ‘dire straits’, as he has spent whatever he had, so “he is unable to come home because the flights are not available.”

She added, “I call upon the Ministry of Foreign Affairs, working through our Mission in Abuja to offer him consular services so that he can be assisted to return home; but to also meet his bills.”

The Speaker also said that she will inform President Museveni about this matter so that Kenzo can be assisted.

“For him, it is even worse because he is in a French-speaking country. Life is not as easy as it would be if he was in an English-speaking country where he could talk with people and get assistance.” Kadaga tweeted.