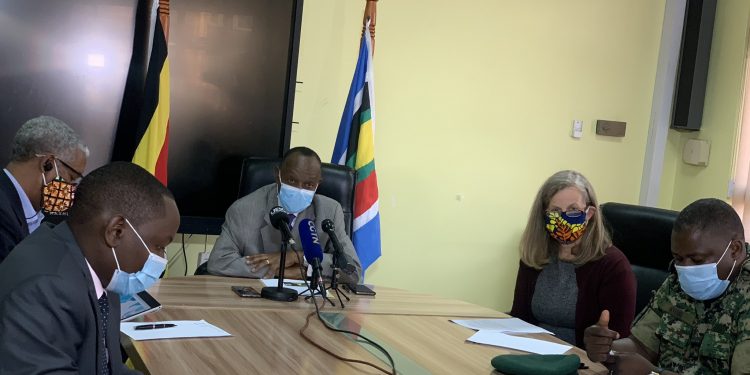 Uganda has registered her first COVID-19 death. A 34 year old Ugandan female, resident of Namisindwa District who presented with COVID like signs and symptoms: fever, dry cough, headache and difficulty in breathing.

Director General Health Services, Henry Mwebesa who has confirmed the news during a presser said the deceased was initially admitted to Wasungui HC II on Wednesday, July 15 and treated for severe pneumonia.

However, on Monday, July 20, she was transferred to Joy Hospice health facility, in Mbale District, where she was isolated in the female ward.

While in isolation, the patient’s condition deteriorated with difficulty in breathing, cough, chills and headache. Unfortunately, she passed on Tuesday at 2:00am. She was buried today as per Safe Dignified Burial procedures.

The postmortem samples from the deceased were confirmed positive for SARS-COV-2 by four laboratories: UVRI, CPHL, Tororo and Makerere.

The Namasindwa District Task Force has been reactivated to coordinate the district response. So far, thirty ( 30) contacts to the deceased have been listed and placed under quarantine by the health authorities in Namisindwa.

The listed contacts so far include family members, and healthcare workers. The process of contact identification and listing is still ongoing.

The contacts will be monitored daily for fourteen (14) days as per our protocol by district surveillance teams supported by Ministry of Health experts who will be deployed in the district.

To date, Uganda has registered 1,079 cumulative confirmed cases of Ugandans and a total of 971 Ugandan recoveries.