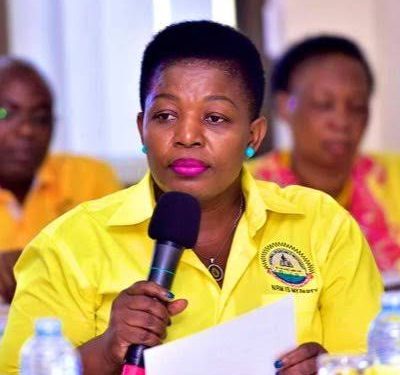 On countless scenarios, the public has critisised security agencies for selectively enforcing the measures and guidelines that were issued to fight the spread of COVID-19 pandemic.

The public together with opposition leaders accused security officers of overlooking at big government officials who to hold huge processions and only arrest opposition figures for hold mere meetings.

Over the weekend State Minister of Finance for Investment and Privatization Evelyn Anite is alleged to have held a campaign procession in her home area, Koboko something which has caused a public outcry calling upon security officers to immediately take action.

“Nobody is above the law and that why as Secretary General I have called upon the enforcement officers to arrest anybody who contravenes the SOP’s whether Ministers, secretary general please do you work. Please enforcement officers fear no body we don’t want to risk people,” Lumumba said.

She said as NRM, every political activity they’re doing strictly follows we the guidelines.