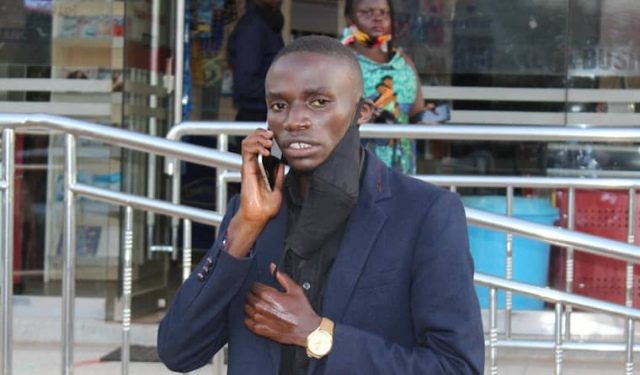 With a video making rounds on social media of the Youngest Presidential Candidate John Katumba walking while his guards car follows him.

The 24 year old has said that he is footing because he’s committed to make Uganda a better country and says Ugandans need to start taking him serious.

“I pity those who think that walking on foot is comedy, we are in a struggle and we are committed to making this country a better place,”Katumba said.
Katumba also revealed that he has no car and was restrained from sitting in the lead car provided by the Electoral Commission because it is supposed to escort him and not transport him.

“I have no car to transport me so I will walk and they’ll follow me. I have not worked like my other fellow candidates so I can’t afford to buy a car. These guards given to me have no choice but to foot with me,” Katumba added.

He was also asked if he will be able to feed the guards and he said that instead of him eating alone and letting guards starve, he will purchase chapati and beans for them to share.

Presidential candidate Mayambala pledges to give Shs500,000 to each mother after delivery

Presidential candidate Mayambala pledges to give Shs500,000 to each mother after delivery