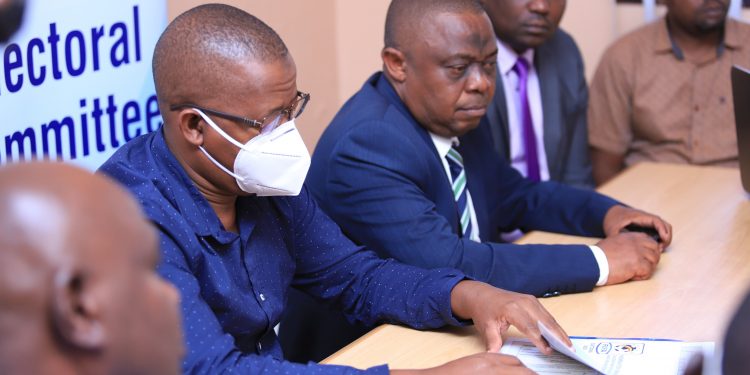 This brings the total of candidates that have picked forms to contest for FUFA’s top position to three. Proline Football Club Director Mujib Kasule yesterday picked his forms and vowed to oust Magogo.

Ssewanyana was the first today to pick the forms and also assured the football fraternity how he’s going to send Magogo’s ‘corrupt’ administration into retirement.

However, Magogo is also ready to cling on for the third term. Magogo who is also the MP-elect for Budiope East constituency has been at the association’s president since 2013 when he replaced Lawrence Mulindwa who decided not to stand for a third term. For the two occasions he has been voted unopposed. His current tenure expires on August 31, 2021.

Elections for FUFA President and Exco set for 21st August 2021 in Mbale. A candidature’s nomination must be supported by one Uganda Premier League or a Big League club, at least one of the special interest groups, and one of the eight Fufa regions.

The candidate must have had football administration experience for at least seven years within the last ten. The nomination exercise is expected to be completed by May 31. A total of 88 delegates will take part in the elections.

Oulanyah to Parliament staff: Do not carry grudges

Mugabe remains to be exhumed after Grace Mugabe tried to hide some of the remains, to be reburied at national heroes’ shrine

Mugabe remains to be exhumed after Grace Mugabe tried to hide some of the remains, to be reburied at national heroes’ shrine