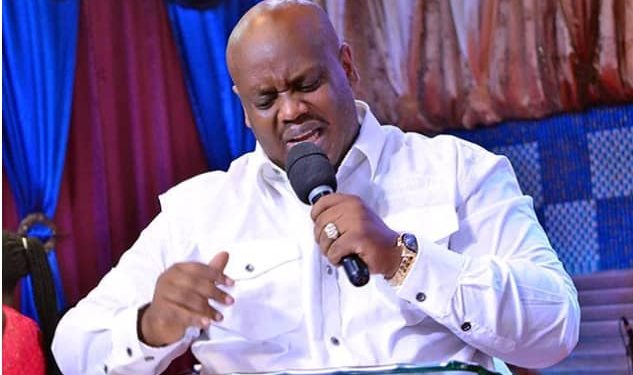 Flamboyant city Pastor, Franklin Mondo Mugisha of Empowerment Christian Centre Church international who flee to South Africa a few months back,has opened up a church in Kenya.
In a video shared on social media by Ugandan comedian Richard Tuwangye, Pastor Mondo is seen preaching in his new church based in Nairobi Kenya.
While preaching Mondo told the congregation that they should stop thinking that social media is bigger than God.
“They thought it was over like some people who are premature in thinking and intelligence, when we come to ministry, we did not come with a reverse gear, we are not created by media, we were created out of the prayer room, we are not created by social media, that’s why I had to fly to Nairobi…,” said Pastor Mondo.
ADVERTISEMENT
Trouble for Mondo and his partners in crime (Catherine Kusasira,Pastor Siraje,Maggie Nakayima) started last year when they were arrested and paraded before the State House Ant-corruption Unit (SHACU) headed by Lt. Col. Edith Nakalema, to record statements over allegations that they had connived with pastor Siraje and others to con billions of shillings from Ugandans.
According to sources privy to the matter, the suspects committed the said crimes between 2018 and 2020, whereby they went to different churches collecting money from pastors and unsuspecting believers, promising to arrange meetings between them and President Yoweri Museveni.
They also lied to their victims that they would secure them jobs abroad and scholarships to study at prestigious educational institutions in Europe, America and South Africa, which they never did.
It is said that Mondo fled the country after learning that he was meant to be arrested on January 28.
Tags: Pastor Mondo Mugisha
Previous Post