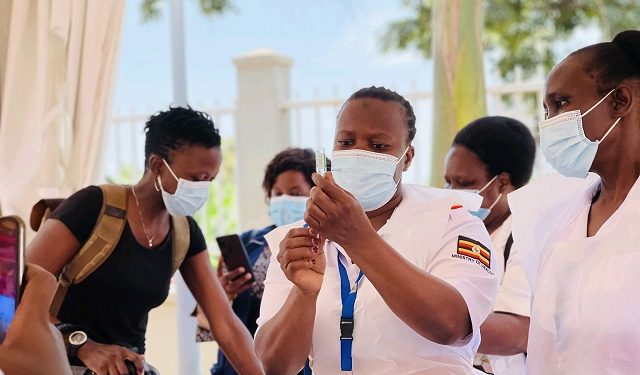 The ministry of health has highlighted the progress of vaccination of the priority groups and the best and worst performing districts in the COVID-19 vaccination exercise.

Ainebyoona Emmanuel, the Health ministry spokesperson said the worst performing district is Terengo in West Nile region with a cummulative uptake of just 33.9%. It is followed by Bunyangabo, Buvuma, Amuru and Namisindwa among others.

Ainebyoona also listed the best performing districts with Jinja topping the list followed by Kyotera and Rukiga. Sheema, Rukungiri, Mpigi, Mitooma and Kikuube are the other districts that are performing very well.

Ainebyoona urged the public to go for vaccination as the latest batch of vaccines are due to expire on September 30 (two weeks time).

He revealed that the country expects an estimated total of 4 million doses of COVID-19 vaccines in September and October. These include; Johnson and Johnson, Sinovac, Moderna and Pfizer vaccines.

In March this year, Uganda started with Kampala and Entebbe to vaccinate before rolling out to other parts of the country. So far a total only 1,697,748 people had been vaccinated by today.

“There is no perfect marriage,” says Pastor Jessica Kayanja

“Jesus walked on foot,” Pastor Ssempa mocked for his fundraiser to buy a new car

"Jesus walked on foot," Pastor Ssempa mocked for his fundraiser to buy a new car