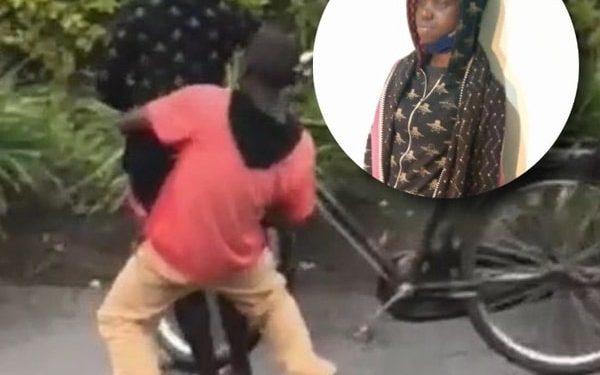 Kisoro ‘couple’ breaks the internet with quickie video by the roadside

The video of the Kisoro couple having sex by the roadside went viral on Wednesday hence attracting public attention and raising concern.

The ‘couple’ was captured on camera having sex by the roadside in Kisoro.

A day later, Police arrested the ‘couple’. The woman was identified as Muhawenimana Colodine Mukamulenzi, a female aged 24, Rwandan by nationality while the man is Hafashimana Paskari, 29, a resident of Migeshi village in Rwaramba parish, a bicycle rider at Travellers Hotel stage in Kisoro municipality.

The two are facing charges of being a ” public nuisance.”

The electronic system was launched in January 2021 to manage the issuance of receipts and invoices for tax purposes in real-time, thus eradicating invoice trading, fictitious purchases, and unverifiable claims due to loss of records.

URA said although the level of compliance to the new system is not bad, surveillance reports indicate that some, especially supermarkets, were selectively complying, while others had completely set the system aside.

The authorities decided to dispatch a team of enforcement officers to selected supermarkets across the country to ascertain whether these were complying with the law, for every single transaction.

On Thursday, Deputy Speaker of Parliament Anita Among received the Commonwealth Games Baton relay from the National Council of Sports.

The customary Queen’s Baton Relay is on a 3-day route in Uganda. The Baton carries a message of Queen Elizabeth II, ahead of the Commonwealth Games in Birmingham. The games are slated for July 28 to 8 August 2022.

The Baton will be visiting all the 72 Nations of the Commonwealth across Europe, Africa, Asia, Oceania, the Caribbean, and America.

In her remarks, Among pledged to support the Ugandan team that will be participating in the Common Wealth Games.

The government of Somalia through the Ministry of Foreign Affairs on Thursday announced the expulsion of Deputy Special Representative of the African Union Commission, Simon Mulongo from the country.

In a statement dated November 4, 2021, addressed to the African Union Commission, Somalia said that Mulongo has been engaging in activities incompatible with Amisom’s mandate and Somalia’s security strategy.

The Somali federal government did not elaborate on the nature of the activities but sources close to the ministry say that Mulongo has been actively undermining the Somali Security Transition Plan.

He was ordered to leave Mogadishu within 7 days.

Both Onek and Nabbanja agreed to work together for the betterment of the country, after a closed meeting.

The meeting comes in the wake of a two-page letter written by Engineer Onek dated Friday, October 29th, 2021 accusing Nabbanja of usurping his powers. In his letter which was leaked on social media, Onek accused Nabbanja of interfering in his ministerial duties and that she had rendered his position irrelevant. He threatened to resign if Nabbanja deemed his office not relevant.

Nabbanja on Wednesday in response said the Minister was indisciplined and that she would not allow laziness.

Uganda seems to be a land of opportunities to some of our neighbors! CECAFA organizing committee this week confirmed that five Eritrean players had disappeared from a hotel in Jinja where their team was camped as they participate in the ongoing CECAFA U-20 Women’s championship.

In a statement released, the association confirmed that the players disappeared on Tuesday morning. They reported the case to Jinja police, who immediately started hunting for the players. No update has since been given about the whereabouts of the players.

“Sheila realised that 50k is better than nothing,” ‘Fans’ divided over Sheila Gashumba’s return on TV

"Sheila realised that 50k is better than nothing," 'Fans' divided over Sheila Gashumba's return on TV