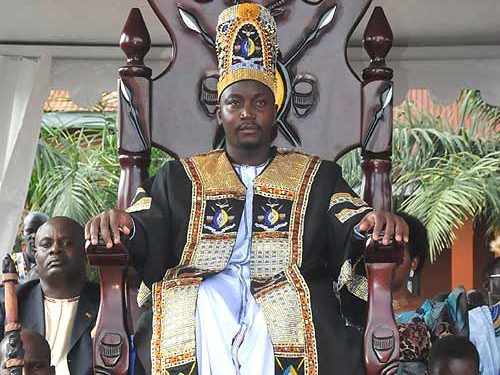 In a new document that has leaked to the internet, HRH Wilberforce Gabula Nadiope IV’s crown as the Kyabazinga of Busoga is being threatened after the Chief’s Royal Council and Hereditary Ssaza Chiefs passed a vote of no confidence whose end goal is to have the reigning Kyabazinga relieved of his duties.

According to the document, the chiefs have made this move in the best interests of the Obwa Kyabazinga Bwa Busoga.

The chiefs further stated that everything being done by their council is in accordance to the Constitution of Obwa Kyabazinga Bwa Busoga that governs the Eleven (11) Chiefdoms.

The council concluded the document calling upon the removal of the reigning Kyabazinga and declared HRH Edward Columbus Wabuzi Muloki as the newly legitimately elected Issebantu Kyabazinga of Busoga.

“Now therefore the Chiefs Royal Council upon removal of HRH WILLIAM WILBERFOCE GABULA NADIOPE IV as seating Issebantu Kyabazinga unanimously reaffirm and declares HRH EDWARD COLUMBUS WAMBUZI MULOKI, The Zibondo of Bulamoji as the newly legitimately elected Issebantu Kyabazinga of Busoga as it were on 31st October 2008,” read the document.

Below is the document.