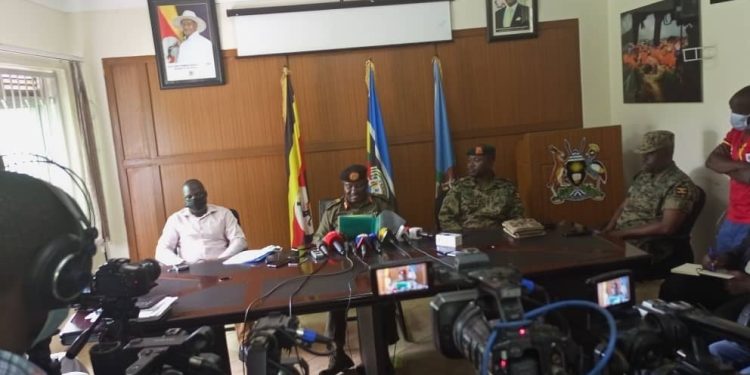 Army under the spotlight again over allegations of acts of torture.

The UPDF is once again under the spotlight over allegations of acts of torture perpetrated against opposition supporters.

On Wednesday, Marinos, who has deep marks of torture, came out and narrated her torture ordeal at the hands of state security operatives. She stated that six security operatives who identified themselves as Chieftaincy of Military Intelligence (CMI) operatives arrested her from her home in Mbuya.

According to Marinos, her torture was “supervised” by two officers, Elias and Hassan.

However, the UPDF spokesperson, Brig. Gen. Felix Kulaigye denied the allegations, saying that Marinos has never been in CMI detention nor was she kidnapped by any of the CMI officers.

Kulayigye further said that on the day she claims to have been kidnapped, there is evidence that she spent the better part of the day talking to her friends on the phone.

An aircraft belonging to Rwanda Air skidded off the runway on landing at Entebbe International Airport on Tuesday.

The Uganda Civil Aviation Authority said that the incident happened at 5:31 am. The CAA said the veering off was caused by bad weather.

The agreement extends an array of incentives and concessions to the investor in a manner that has been widely criticized as monopolizing Uganda’s coffee business.

The ministry is blamed for the failure to consult stakeholders in the coffee sector and went ahead to sign on their behalf.

Legislators from both the ruling NRM party and the opposition have threatened to censure the Minister of Finance, Matia Kasaija, over his failure to guide the government on the controversial coffee deal with Pinneti.

Uganda’s Esther and Ezekiel light up Canada Got Talent

This week, Ugandan vocalists and siblings Esther and Ezekiel Mutesasira raised Uganda’s flag so high after putting up a stellar performance at Canada Has Got Talent (CGT) season 3 auditions that premiered in March.

17- year- old Esther and 13-year-old Ezekiel gave the live audience and the judges goosebumps as they performed Jordin Sparks’ “No Air.”

Their performance at the auditions earned the duo applause from the four judges. The siblings progressed to the next stage. Their performance has since gone viral in Uganda with masses applauding their immense talent.

Christian Life Church lead preacher and owner of Top Media, Pastor Jackson Ssenyonga, is once again making news headlines for allegedly failing to pay Top TV employees’ salaries. This has forced his employees to lay down the tools.

This is not the first time Top radio and TV employees have gone on strike. Last year, the workers dragged Pastor Ssenyonga to the Gender Ministry, along with the station’s general manager, Ronald Mubiru, over the same.

Sources reveal that when Pastor Ssenyonga agreed to pay their salary arrears last year, he first deducted the tithe.

Army denies torturing NUP supporter Alexandreos Marinos, claims the victim was on phone talking with friends during the days she alleges that she was in detention

Besigye ready to walk around town in celebration of his birthday

Besigye ready to walk around town in celebration of his birthday