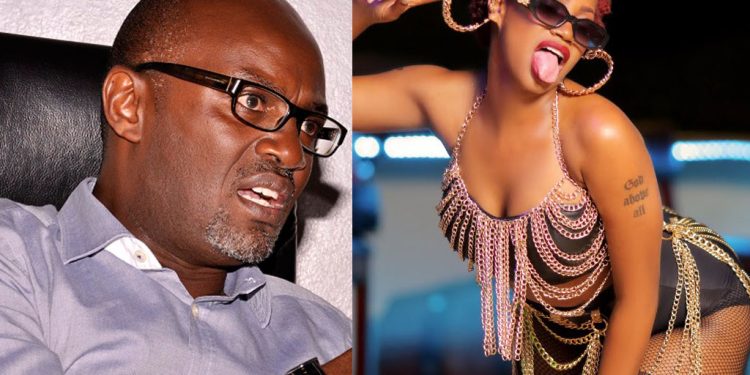 Video footage that has since gone viral on social media, shows the military police officer dragging the traffic officer by his collar.

The incident occurred near Mukwano mall along Kyaggwe road at Kiseka market when military police officers driving a green vehicle with registration number D02DF08P ordered the traffic officer to clear the way for them in vain, leading to a scuffle.

The Defense Ministry Spokesperson, Brig Gen. Flex Kulayigye claimed that the UPDF officer was arrested and investigations will establish what transpired at the scene are ongoing.

He said whoever is found in the wrong will be handled according to the law.

On Tuesday, American star and beauty mogul, Rihanna, through her official Twitter page, revealed plans to launch her Fenty Beauty and Fenty Skin brands in Africa.

Rihanna stated that the brands would, from May 27, become available to eight African countries, including Kenya, Botswana, Ghana, Namibia, Nigeria, South Africa, Zambia, and Zimbabwe.

However, it is seemingly the inclusion of Kenya in the selected few countries that caught Ugandans’ nerves.

A section of social media users in Uganda took offense after the ‘Work’ singer Rihanna snubbed the Pearl of Africa in her plans.

One of the Ugandan ‘patriot’ users, @I’mCharlotte, as her Twitter Page name, questioned the Umbrella crooner why she settled on Kenya, sensationally claiming that the whole of Nairobi is not connected to electricity.

Charlotte’s claim caused a storm on social media. The unforgiving Kenyans on Twitter descended on her, insisting that Ugandans have no moral authority to talk about Kenya in terms of development.

On Friday, the government has finally agreed to lift the two-week suspension that had been imposed on the Link Bus company after the nasty Fort Portal accident last week. The accident claimed the lives of 21 people.

Minister for Works and Transport, Gen Katumba Wamala said they have gone through all the processes and taken measures to address the gaps that were there.

Earlier this week, Sheebah took to her social media and narrated how a ‘respectable’ public figure tried to sexually harass her. The singer didn’t mention the name of the public figure, something that created speculation about who harassed the singer.

Veteran journalist Andrew Mwenda’s name has been massively brought up as the ‘respectable man’ suspected to have harrassed Sheebah.

However, Mwenda denied the emerging accusations that he sexually harassed the singer on Friday.

Three people were confirmed dead after a government ambulance attached to Bwera Hospital caught fire along the Fort Portal-Kasese road.

The ministry of health disclosed that the emergency care teams were transferring a referred patient from Bwera to Fort Portal Regional Referral Hospital in an ambulance that caught fire while in transit at Kibiito.

Five people were on board at the time of the fire that started in the patient’s cabin. three people in the patient cabin died, while the two in the front cabin escaped with severe burns and were evacuated to Fort Portal for stabilization and care.