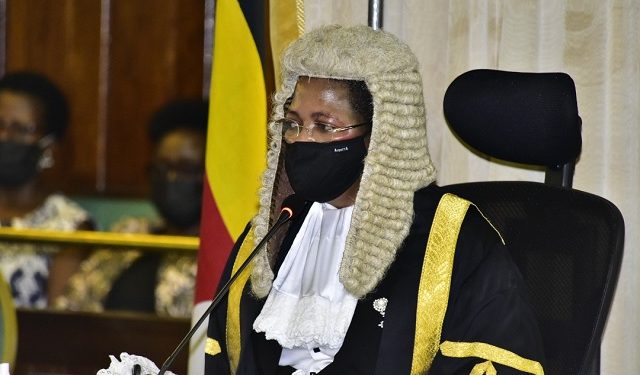 Speaker of Parliament Anitah Among has rejected a decision by the opposition to remove Badege Layibi legislator, Ojara Mapenduzi, from the shadow cabinet.

On Tuesday, the Leader of Opposition Mathias Mpuuga, announced changes in the shadow cabinet. Mapenduzi was removed from his position as the Chairperson of the Parliamentary Accounts Committee, Local Government, and replaced by Hon. Gilbert Olanya.

During today’s session, Mpuuga sought to replace Mapenduzi as the chairperson of PAC (Local Government).

However, Speaker Among said that the re-designation can only be done through a substantive motion that will be subject to approval by the whole house. She added that Mapenduzi should finish his two-and-a-half-year term of office.

In response, Mpuuga suggested that the matter should be handled administratively without subjecting it to a contest in the whole house.

In March this year, Mapenduzi moved a motion that led Mityana municipality MP Francis Zaake to be removed from the parliamentary Commission.