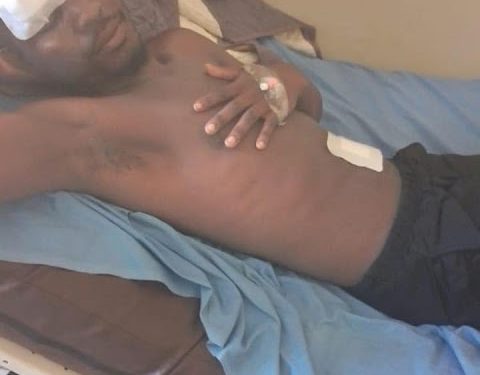 The Uganda Medical and Dental Practitioners Council has said that Muhammad Kabanda, the Owino market vendor who claims that his kidney was harvested, had only one kidney.

While addressing journalists this morning at the Uganda Media Centre in Kampala, Dr. Joel Okullo, the Chairman of the Uganda Medical and Dental Practitioners Council, said that radiologists reviewed graphs taken from Mulago, Mengo, Malcom, and Kampala hospitals and concluded that Kabanda’s kidney was never harvested as he had only one kidney.

“The specialists demonstrated that there was only one kidney(the right kidney), which normally occurs in 1 in 750 people. They also found a big right kidney. The right kidney had two renal arteries supplying it,” he said.

Okullo explained that the size of the incision on Kabanda’s stomach didn’t go beyond skin tissue.

“And according to the site and size, it would have been very difficult for anybody to harvest a kidney through that site, as one would have to go through several layers of muscles to reach the kidney,” said Okullo.

“On further examination, they found that, according to the mobility of the lower limbs, it was clear that the internal structures were not tampered with,” he added.

The report, which is from the council mandated to protect the public from the unsafe practices of medical and dental practitioners, also indicated that it was in order and a routine procedure to secure fat from the anterior abdominal wall to fill in the defect occasioned by the fracture on Kabanda’s head.

Muhammad Kabanda, a vendor in Owino market accuses Old Kampala Hospital of harvesting his kidney without his consent.

According to Muhammad, he was involved in a motorcycle accident along Lukuli in May 2022. He sustained head injuries and was admitted to Old Kampala Hospital.

He explained that the hospital recommended that he undergoes head surgery at a cost of Shs3,600,000.

However, after the surgery, Muhammad said that he observed that he had fresh incisions around his lower left abdomen area.

This prompted him to visit different hospitals, which included Malcom and Mulago Hospitals. After the CT scans, both hospitals confirmed that he has only one kidney.