Beneath the Lies to premiere on Urban TV this December 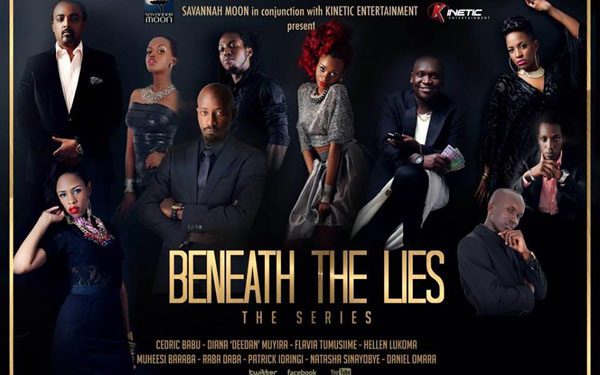 It is one of the most anticipated TV series in Uganda, with a star studded cast and a production of Nana Kagga who has had stints in Hollywood. The producers describe Beneath The Lies as a thriller with an intriguing story line with a lot of blackmail, child prostitution, human and drug trafficking. The makers of the series announced that it will be airing on Urban TV, starting in December. “Beneath The Lies is officially Urban, we are proud to announce that we have joined the Vision Group family and you will all be able to watch our edgy series on Uganda’s most edgy TV Station-Urban TV this December.”

The cast The series has already drawn interest because of the famous faces that were cast for the various roles. They include 2003 Big Brother Africa host Gaetano Jjuuko Kaggwa who also starred in M-Net series Changes, Capital FM’s Flavia Tumusiime whose first acting role was in Kiwani: The Movie, comedian Patrick Idringi Salvado, Rabadaba, Daniel Omara, Hellen Lukoma who starred in NTV’s Hostel, Natasha Sinayobye, Kinetic Management CEO Cedric Babu, Deedan Muyira, Susan Naava and others.   Though some fans had asked for the show to be on NTV, reaching out to the producers via their online platforms, it is Urban TV that gave the best offer. And there was also another reason, “Both Gae (Kaggwa) and Omara (Daniel) already have two popular shows on Urban TV so we’re definitely happy to join them there with what is set to be the best of UG TV Production,” read a post of the show’s website   The crew The series is produced by Savannah Moon productions in conjunction with Kinetic Management Group. Nana Hill Kagga is behind Savannah Moon that also produced a Uganda movie The Life, last year. She started out as a presenter on WBS’ Jam Agenda and has appeared in Hollywood productions like Star Trek (2009), He’s Just Not That Into You (2009) and A Good Day to Be Black & Sexy (2008) and CSI New York (2007). Kenyan filmmaker Tosh Gitonga behind the hugely successful Nairobi Half Life movie is the series’ director. Tosh has also worked on other films such as the BBC’s The First Grader (2010) as a First Assistant Director and on All That Way for Love (2011) as an Assistant Director. The Filmmaker has won many awards among them Best African Director: First Feature at the Pan African Film Festival in Los Angeles (2012). He was also nominated as Best Director in the Africa Magic Viewers’ Choice Movie awards.
Tags: Beneath The LiesCedric BabuDaniel OmaraDeedan MuliraFlavia TumusiimeGaetano KaggwaGitongaHellen LukomaNana KaggaRabadabaSalvado IdringiToshUrban TV
Previous Post

We blew it again: Cranes need miracle to qualify for Afcon

Here are the Miss Uganda finalists, you be the judge

Here are the Miss Uganda finalists, you be the judge