Win or lose; I feel ZERO patriotism as far as “Luganda Cranes” is concerned — Timothy Kalyegira 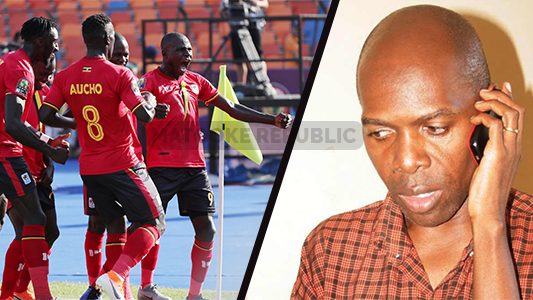 Veteran journalist Timothy Kalyegira has said that he feels zero patriotism in as far as the national team, Uganda Cranes is concerned.

Through his Twitter handle, Kalyegira shocked his followers when he said that Uganda Cranes reminds him of the “low-brow, kiyaye Uganda” adding that he is ” generally indifferent to the Cranes.”

“It doesn’t sound like a national team to me,” he tweeted eliciting angry reactions from fans that watched on as the Cranes tormented neighbours DR Congo in their opening game in Egypt.

Known for criticizing everything Ugandan, Kalyegira did not hide his feelings towards the national team that is participating in their second consecutive AFCON finals after a 39-year absence at the continental stage.

In his usual bare-knuckle attacks, Kalyegira was not shy to say that he finds nothing interesting about the Uganda Cranes that would qualify as national or worth his attention.

Tongue-in-cheek, Kalyegira also send a veiled at the national team squad for having a big Buganda concentration branding the team “Luganda Cranes.”

MEET THE BOSS: Dr Elly Karuhanga shares about oil, success and the power of networking

Win or lose; I feel ZERO patriotism as far as “Luganda Cranes” is concerned — Timothy Kalyegira