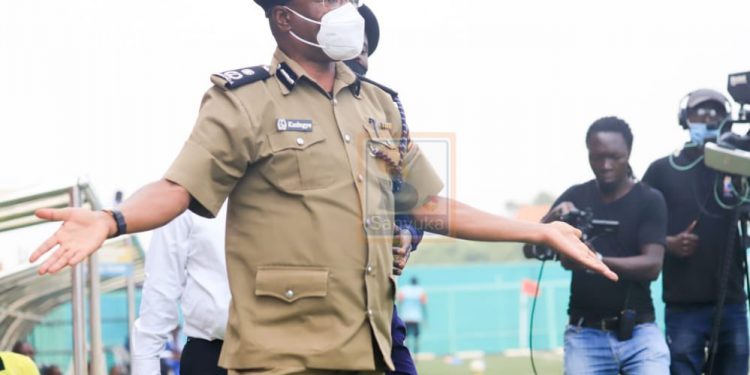 Police Football Club chairman AIGP Asan Kasingye was left fuming after a controversial red card was shown to goalkeeper Derrick Ochan (Police FC) for allegedly holding the ball outside of his box in a game between Police and Vipers SC at St Mary’s Kitende in the StarTimes Uganda Premier League fixture that was played yesterday on Friday.

At the time of the red card incident, Police was leading 2-1 but hosts Vipers overturned the result in their favour winning 3-2.

The renowned Twitter Cop through his platform announced how he has liberated himself from watching Uganda’s football as he has missed a few games in the last 35 years.

“I will play a back role as Board chair and continue to look for sponsorship. Now, I will never be seen again watching any league game in any stadium in Uganda or give an interview,” furious Kasingye said.

Kasingye wants all responsible authorities in Ugandan football to immediately act on Vipers SC who he accuses of being corrupt as they pay referees to win games and titles. He says if not tamed, sponsors will withdraw their sponsorship deal due to these corrupt tendencies.

That team (Vipers SC) must be banned for life. This is a mockery of our time, money and effort in football. Vipers must stop this and play football. Stop cheating,” he said.

However, a section of football analysts and supporters say Kasingye is overreacting since even worse incidents happen not only in Ugandan football but also at international level. Nevertheless they say that cheating in Uganda has become a routine.

“Be unique but don’t pretend to know all,” says VU Chancellor as university awards students at 5th Graduation Ceremony